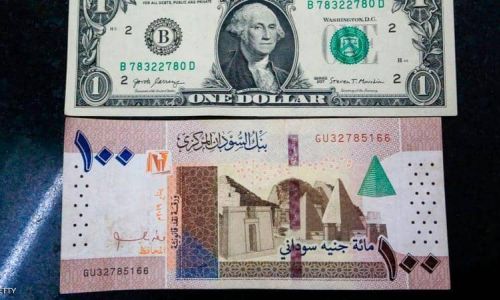 To prevent speculation … the Sudanese Central Bank decides to “float the pound.”

Advertise Central Bank of Sudan In today’s statement, Sunday, the standardization of foreign exchange rates against Sudanese pound As part of measures to try to solve the deep economic crisis in the country.

“To address these imbalances, the transitional government decided to adopt a package of policies and measures aimed at reforming and unifying the exchange rate system,” said the statement, which was distributed to the media. He added that the measure allows him to set the exchange rate according to supply and demand.

The value of the Sudanese currency on the black market decreased until the value of one US dollar reached 400 pounds, while its value at the official rate at the bank did not exceed 55 pounds.

The central bank said that it has also decided to “transfer resources from the parallel market to the official market and attract remittances of Sudanese working abroad through official channels,” stressing that it wants to “limit smuggling of goods and currencies and fill the gaps to prevent speculators benefiting from a gap between the official price and the price in the parallel market.” “.

Analysts expect the Bank of Sudan’s move to float the local currency to an increase in commodity prices, which will counteract popular anger.

The bank indicated in its statement that it imposed restrictions on the movement of foreign currencies by allowing travelers outside the country to carry an amount of only one thousand dollars.

The Central Bank hopes to “stimulate producers, exporters and the private sector (…) and attract foreign investment flows and normalize relations with regional and international financing institutions and friendly countries in order to ensure attracting grant and loan flows from these bodies and help work to exempt Sudan’s external debts by taking advantage of the initiative of the poor countries.” Indebted. “

And the inflation rate in Sudan in January reached more than 300 percent.

The decision came after the formation of a new government early this month, which placed its top priority on addressing the economic crisis.

There were protests in different parts of the country after the government announced an increase in food prices. But the government accused supporters of President Omar al-Bashir, who was ousted by the military, of being behind the protests.

During the past months, the United States removed Sudan from a list of countries accused of sponsoring terrorism. The government hopes that this step will help it attract foreign investment and address its $ 60 billion foreign debt. Tunisia..a presidential order relieving the prime minister and the ministers of defense and justice from their posts