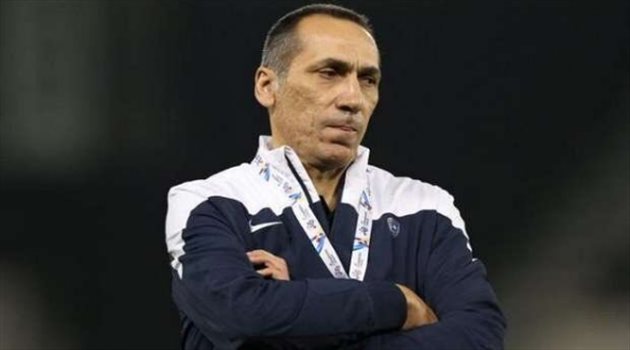 Dennis enlists attacking ball and Greek philosophy to save the unit

Giorgos Dunes is armed with a team coach Unit New, with the offensive ball weapon in search of achieving the impossible mission with the “Knights of Mecca”.

The Al-Wehda team is suffering remarkably this season due to successive losses that made it occupy a late position in the competition schedule, threatening it to fall into the second division league, so Al-Wehda management resorted to the Greek coach in order to salvage the Mecca Knights from relegation.

The Greek coach is distinguished by daring and offensive thinking besides his “philosophy”, which is the characteristic of coaches in Greece and are weapons with which Dennis will try to keep unity in the Prince Mohammed bin Salman Professional Cup League.

Dennis had a good experience before in the Saudi League through Al-Hilal Gate, during which he succeeded in achieving good successes with the leader, which was the reason for his return to the Saudi League, but this time through the Al-Wehda Gate.

The task of the Greek coach is not easy and some see it as impossible, as he is with a team facing strange misfortune this season and he has become one of the strong favorites for relegation.

Dennis knows that his mission is very difficult with the Knights of Mecca, and he talked about it, saying: I feel happy to return again to Saudi Arabia again..I have good memories and feelings in the Kingdom.

He continued: Al-Wahda made strong performances last season that made them participate in the AFC Champions League … but the situation this season is difficult and I do not exaggerate if I say that many of the world’s clubs are suffering due to the “pandemic” of Corona.

Al-Wehda ranks fourteenth in the Prince Mohammed Bin Salman Professionals Cup League table, with 27 points after 24 rounds, and has not tasted victory in the last 6 matches during which it was defeated.

Dennis trained Al-Hilal from February 2015 until May 2016, and succeeded in winning 3 titles with Al-Hilal, where he won the Saudi Super Cup, the Saudi Crown Prince Cup and the Custodian of the Two Holy Mosques Cup, and finished second in the professional league behind Al-Ahly with 55 points.

Dennis led Al Hilal in 66 matches during all competitions, during which he won 45, drew 11 matches and lost 10 games.

Previous The Voice of Iraq | American website: NATO’s role in Iraq is subject to expansion in the future
Next Aman: The transmission factor continues to decline, and no red towns | Israeli women

Video – A funny shot of its kind, Alaba saves Arnatovic from being expelled!